Rating (average):
(1)
Listing Title:
Sunrise Flour Mill
Listing Category:
Featured Businesses, Food Products, General, Health, Household, Manufacturing, Minnesota, Resources
Short Description:
The webmaster is promoting this brand of wheat. I have a terrible wheat gluten allergy, but this old fashioned wheat causes me no problem. We made the Cherry Pie (below) from this brand of flour. It tastes incredible, flaky crust that is better than commercial flour, and no reactions from gluten allergies what so ever!

The text below is from their website:
Modern wheat is very different from the wheat our ancestors ate. The developments in grain have made it difficult for some people to digest, but that doesn’t necessarily mean they need to change to a gluten-free diet. If you’ve experienced negative health effects as the result of gluten intolerance, but miss your morning toast or favorite dessert, Sunrise Flour Mill’s Heritage Flour products may be the answer. These superior flours aren’t just for those who experience problems with gluten. Many people use Heritage Wheat because it truly tastes like wheat and results in delicious pastries, breads, pasta and pizza. 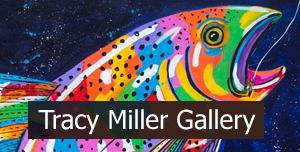 Rating (average):
(1)
Listing Title:
Tracy Miller
Listing Category:
Arts, Featured Businesses, Manufacturing, Minnesota, Painting
Short Description:
After earning her Bachelor’s degree in Art, Tracy spent several years learning the art gallery business by selling other noted artist’s works, then started her own full time painting career after moving to Colorado Springs in 1994. Her favorite subject matter and best sellers are her dog paintings and she also loves to paint the wildlife and symbols of the Western United States. In the last two years she has added pet portraits to her repertoire after much demand and request from collectors. The popularity of her dog paintings has also drawn attention from the publishing world and her prints are now sold in Home Goods, TJ Maxx, Home Sense of Canada and other retailers around the world.
Website:
https://www.tracymillerfineart.com/
Listing Tags:
animals, art gallery, COWBOYS & INDIANS, CUSTOM COMMISSIONS, DOMESTIC ANIMALS, EXOTIC WILDLIFE, fine art, GHOST ANIMALS, paintings
City:
Brainerd
State:
Minnesota
Country:
USA
My Patriot

Rating (average):
(2)
Listing Title:
My Pillow
Listing Category:
General, Household, Manufacturing, Minnesota
Short Description:
Visit the sponsor of the united States of America, Mike Lindell. Buy as many pillows, and other products and you possibly can. Donate what you don’t want to Charities, we recommend . Get a tax deduction for your donations and force the Government to pay for his efforts against them. Now we can turn the tables. Mike Lindell will need funds for the Patriotic work he is doing. My Pillow. Guaranteed The Most Comfortable Pillow You’ll Ever Own!® Mike Lindell is developing his own social media platform to replace YouTube and Twitter. Support Mike Lindell , buy a pillow or some sheets, dog beds, etc. Article on Mike Lindell https://www.theblaze.com/news/mike-lindell-social-media-app
Website:
https://mypillow.com
Phone:
1-800-308-1299
Listing Tags:
bedding, dog beds, dogs, Minnesota, pillows, Shackopee, sheets
City:
Shackopee
State:
Minnesota
Country:
USA
Lone Pine Legends

Rating (average):
(3)
Listing Title:
Lone Pine Legends
Listing Category:
Arts, Books, Household, Minnesota
Short Description:
He was shot and wounded by a deer hunter in a dismal Northern Minnesota swamp; he was pulled out of the raging water of the St. Louis River on Spring day and saved from drowning; he rode a run-a-way team of broncos, pulling a hay rake through two barbed wire fences and several gates and he also matched wits with the great German Field Marshal Rommel in the North African Desert in World War II.
He shook hands with Winston Churchhill, Irving Berlin, Ernie Pyle, and Clara Boothe Luce and with whomever was Mayor of Rome in 1945.
He has lived a life that not many men would have survived but he is still here in the country that he loves, The United States of America! He has now written his second book on some of his life experiences and observations from the boundary waters to the Crow River; from the Kasserine Pass to the monastery at Monte-Cassino and from the fertile fields of the Po River Valley to the moss covered forests of his home country, from thirty years of school teaching from a stint on the CC camps to a tour as one of the Minnesota’s conservation wardens, to lumber camps, draft horses, boxing, truck driving, etc.
His language is vivid, descriptive colorful and direct as he tells his stories in a manner that is exciting and interesting to both sexes and to youngsters as well as to grandparents.
His stories will make you laugh, they’ll make you cry also and more than likely a few will even make you say a prayer quietly as you read through the book but you will never forget the words of the author who “DOESN’T WRITE STORIES; HE SIMPLY TELLS THEM!”